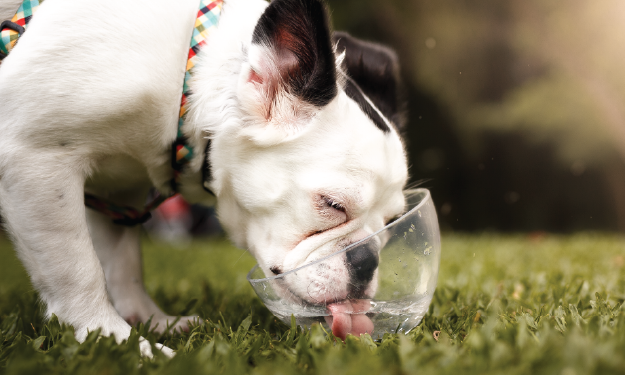 What is Cushing’s Disease in Dogs?

Cushing’s Disease in dogs, otherwise known as hyperadrenocorticism (HAC), is a condition of increased circulating cortisol in the body. Cortisol is the body’s natural steroid that is very important for maintaining many normal processes. Cortisol is produced by the adrenal glands, which are little glands that sit next to the kidneys and produce cortisol, adrenaline, and many other hormones.

There are two primary types of HAC recognized in dogs: pituitary dependent (PDH) and adrenal dependent (ADH). Like many hormone processes in the body, there is tight control on how much of a hormone is being produced.

Adrenocorticotropic hormone (ACTH) is secreted from the pituitary gland in the brain. This hormone regulates the secretion of cortisol from the adrenal glands. When enough cortisol has been released into the blood stream, the adrenal glands decrease the amount of cortisol being made, which decreased the production of ACTH.

What Causes Cushing’s Disease in Dogs?

Pituitary dependent hyperadrenocortcism (PDH) is the most common cause of Cushing’s Disease in dogs, and it occurs when a small, benign tumor forms in the pituitary gland and produces an abundance of ACTH, which stimulates the adrenal glands to produce cortisol. The tumor cells do not have an “off switch”. This results in the adrenal glands becoming enlarged due to continued pressure to produce more and more cortisol.

The tumors can be both microscopic or large and visible. Most dogs with PDH have a high quality of life as long as they routinely take their medication and stay up to date on their visits to the veterinarian.

In ADH, excess cortisol is produced due to a tumor on one of the adrenal glands. Just like the tumor cells in the pituitary gland, the adrenal tumor cells do not have an “off switch” and they continuously produce large concentrations of cortisol. The tumors can be either benign or malignant; if the tumor is benign, it can simply be removed to cure the disease. If the tumor is malignant, however, the prognosis is not as simple.

Symptoms of Cushing’s Disease in Dogs

The biggest telltale sign of Cushing’s Disease in dogs is an increase in urination and drinking. Dogs with Cushing’s disease also have an increased appetite. The fur may become thin and does not grow back normally after being clipped. The skin on the belly can become thin and they start to develop a big, round belly (pot belly). Dogs with Cushing’s Disease may also have high blood pressure and, if severely affected, may develop blood clots in the lungs or legs.

Diagnosis of Cushing’s Disease in Dogs

Diagnosis of Cushing’s disease is not always straightforward. If you present your older dog to the veterinarian for an increase in drinking and urination, the minimal lab work that is recommended is a complete blood count (CBC), chemistry panel, and a urinalysis. If the history, physical exam, and initial blood work results suggest Cushing’s Disease, special tests may be recommended.

A urine cortisol creatinine ratio is a screening test for Cushing’s that can be done without having to bring your dog to the veterinary office. If this test is negative, your dog does not have Cushing’s Disease. If the test is positive, then further testing is needed.

An ACTH stimulation test takes 1 hour to perform: a blood sample is taken, a small amount of synthetic ACTH hormone is injected and another blood sample is taken 1 hour later. Cortisol levels are obtained and if the second cortisol is elevated Cushing’s Disease is diagnosed.

Specific testing for Cushing’s disease may not be recommended if your dog only has changes on basic lab work but no clinical signs of Cushing’s because how Cushing’s is treated in dogs.

Treatment for pituitary dependent Cushing’s includes use of oral medication and the goal is to treat the clinical signs (increased drinking, urination, appetite, skin/fur changes). Direct treatment of the benign brain tumor is not usually done. This would involve radiation therapy or, rarely, surgical removal of the pituitary gland.

Control of the clinical signs of Cushing’s Disease may be managed with the following medications: trilostane (vetoryl) or mitotane. Trilostane blocks the production of cortisol in the adrenal glands resulting in less circulating cortisol and a decrease in clinical signs. Mitotane is a cytotoxic medication and destroys the cortisol producing cells in the adrenal gland. Close monitoring is required to titrate the doses carefully.

Adrenal dependent Cushing’s Disease can be treated with surgical removal of the mass. Adrenal masses have a 50% chance of being benign or malignant and there are no tests before surgery to make that differentiation. If the tumor is completely removed during surgery and is malignant, the dog has a high chance of being cured.

The Importance of Diagnosing & Treating Cushing’s Disease in Dogs

Testing, treatment, and monitoring of Cushing’s Disease is expensive and time consuming. However, if Cushing’s Disease is not treated the described clinical signs will progress impacting the dog’s and the family’s quality of life. The risk of developing a blood clot increase and secondary effects of high blood pressure may result.

Annalisa Prahl, DVM, DACVIM has been practicing Internal Medicine at Bulger since 2011.

She has refined her skills by managing a wide variety of patients and conditions, and enjoys all aspects of internal medicine. Dr. Prahl takes a special interest in diseases of the kidneys and urinary bladder.